THE PLANET CONCEIVING A FEW LIES

Is the devil a man who deceive someone
With a little bit of truth that a great untruth combined?
A word that is born a moment ago is lighter than a dandelion
A word that is buried waits her own resurrection on the wind path
A word that is missing threw herself a long ago

The spring has come like investigating something, but it is not the real one.
A noon that sun is blazing like midsummer
Full bloom of roses take season’s false pulse
As they conceive a smell of death
In the heart of the planet,
Swirling frenzied blood that is gang-raped, comes across straits
The womb of the planet
We don’t need any sonogram
A chunk labeled as an embryo
And a boundary of water
From fish, amphibian, reptile to mammal
That evolutionary seal
That false package of gene
Today, a gunfire bursts somewhere on the planet again
I can hear the heartbeat of the planet
An Embryo born today remembers the sound

Dream is the word of my own error

Dream is the word of my own error
As flowers blooming
In the backyard of an fallen dynasty
Seem clearer in their wretchedness,
The place I have never been
Is always full of primitive colors
It's a total natural colors cinemascope
From the memory of a kaleidoscope

The reason why the baobab put her root
On her heads with her branches
Is that she dreams all day and all night
It's because they reach their cells of dream
Towards the air
No, it's not
It's their fault that they only dream of the sky
Without taking her roots into the ground
The dream of seeping souls in a language

As a little pain comes in and pushes the big pain away,
As a dirty bacteria comes in and prevents a big sickness,
Dream is a vaccination
It's a theater showing a preview of life

The Angle of a blind spot

The faded sunlight shines through the leaves
Underneath the tree, the leaves turn into a navy blue canvas
A hazy curtain hung
At the evening when red and black are blended
The hour of the devil, neither day nor night
Spiders are coming down low
A bird flies low
Lives falling down from the air

Under the influence of that power,
The heaven comes to the earth
The boundary between the earth and the sky is erased
Now is the time to forget what we said during the day
At the end of the earth's axis
Where the blood of day and night is blended
A dream that hasn't cooled down is being buried
The sunset drags its feet carefully
Not to spill over the blood in a basket
A person also flows holding up their lives in critical condition

I came to see a walking tree of mirage
Created by the yearning for the sunshine, but...
A tree that has its own feet
A tree that has its root on its body
To move along to get nutrients
Suddenly, a cluster of trees looks like a group of people
A death spot
Appearing on the skin immediately after death
I wonder if the spot has buried lives in it
A moment
When things look dimly
At the evening neither day nor night,
The angle of a blind spot
That cannot distinguish this world or afterlife 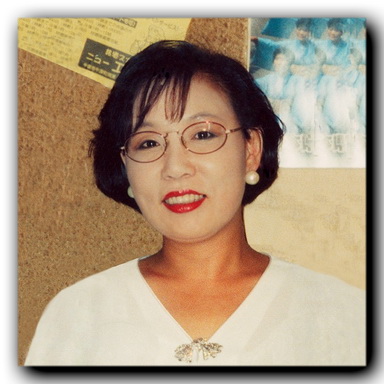 Sungrye Han
Born in 1955 Rep of Korea. Poet, Translator(Japanese-Korean). Adjunct professor.
She majored in Japanese language and Japanese literature at Sejong University and earned her master's degree in Japanese studies at Sejong University's Graduate School of Policy Science.
Her works have earned her the Newcomer Award of <Poem and Consciousness>, Korea's the Heonanseolheon Literature Award and Japan's Sitosozo Award.
Book of Poetry 『The Beauty in a Laboratory』, 『Smiling flowers』in Korean, 『The Sky in the Yellowish Red Korean Skirt』, 『Drama of the Light』in Japanese. Historical essay 『The Formation of the Ancient Nation in Japan and Japanese oldest anthology Manyo-shu』 and so on.
Her poems express Korean tradition, life and death, sadness, pain and anguish in surrealism, modernism and avant-garde forms
She translated many Japanese literary works into Korean and many Korean literary works into Japanese. This work includes more than 200 volumes, for example, poems, novels, essays, poem anthologies, books for children, humanity books, self enlightenment books and scientific books. In particular, she translated many poems and Book of Poetry between Korea and Japan.In particular, she translated many poems and Book of Poetry between Korea and Japan.
Korean textbooks used in Korean high schools contain several translations of her for educational purposes.
She has translated and introduced Korean and Japanese poems in literary magazines between the two countries since 1990.
She is now an adjunct professional at Sejong Cyber University in Seoul, South Korea.